I haven’t posted since early December when I reported on the first phase of replacing all of the 20+ step lights around the villa. I’m still woking on that one but not too many left to replace.

The owners came for a visit from early December unitl the 22nd so while they were here they found a few more small items they wanted added to the project list. Some of these we tackled while they were here, all the while still replacing step lights on the east patio.

Several projects were BIG ones that had been on the back burner for some time. The biggest project was resurfacing the entire villa roof with a Vulkem® Roof Terrace/Deck Coating System. This has to be done by someone who is certified in the application process as well as it has to be inspected during the process by the Vulkem coating supplier so the warranty is valid. The villa roof was in dire need of resurfacing.

This was a learning experience for us. Although I did not have a hand in the application process, I did have to find certified installers and get quotes for the owners to interview and hire once they arrived in early December. 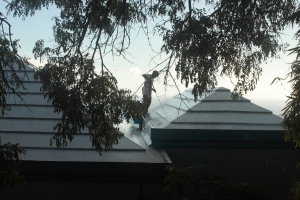 First, the entire roof surface had to be pressure washed and cleaned. This means sealing off the gutter drains to the cisterns to keep “crap & debris” from entering the drinking water supply. The pressure washing created quite a mess – on the yard, driveway, and patios and decks. But that’s just part of the process. There is not escaping the mess. So we helped with the cleanup process before the coating phases began.

During the whole Vulkem coating process, I took photos (see Gallery below) of the different steps involved; for several reasons. One, just to document the project; and two, to build a photo book for the local installer, Edward Esprit, so he can hopefully get more similar work once folks can see photos of this job. He is a great guy and had some great helpers with him. They were under a very tight timeline due to guests arriving and throw on top of that, we lost two full days to rain – rare in December.

But it got completed the same day guests arrived and it looks awesome. The installer even came back after the guests departed and did some touchup paint work on some trim around the villa.

I was very pleased with the outcome and I learned a lot about the Vulkem® Roof Terrace/Deck Coating System. And a big shout out to the Paint Depot professionals in STT for supplying the materials and providing the expertise, advice, and inspections to cover the warranty.