It took over a year to sell our dream home in Alabama but the right couple did come along. We sold it in 2011. So, now where do we want to go and what do we want to do? We were watching the couple’s job sites and applying occasionally but only for jobs in the southeast as my mom was in a nursing home in ATL and we didn’t want to get too far away … just in case something happened to her. I’m sure this is and can be a big issue for many wishing to pursue the couple’s job lifestyle. But we kept looking at the updates and applying for positions we thought we’d like or fit us. No cigar yet. 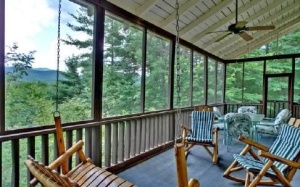 home on top of a mountain just south of Blue Ridge, GA. Gorgeous place and excellent views out to the east and southeast looking to the Aska Adventure area of Blue Ridge. And as fate would have it, only a few days after closing the home, Sharon received a call from some friends and co-workers from her Russell days and they offered her a job with their new apparel-related company. Everyone in the company works from a home office.

Perfect. For now. But I’m still scanning the couple’s job and dreaming. But mom isn’t getting any younger and is starting to have some health issues. We wouldn’t feel right going too far away and Blue Ridge is only 1.5 hours north of ATL.  So we settled into our new home in the north Georgia mountains. And dream.

We escaped the hustle/bustle, crime, and corruption of big city Atlanta, GA (where I was born and raised and Sharon lived from early teens) in 2007. The door cracked open and we jumped through it. We had been wanting to depart the ATL for about 4-5 years. Sharon’s work took us to rural east Alabama where we bought 21 acres of old pastureland and built a nice Southern Living design home. 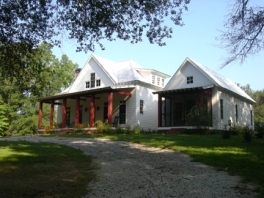 Loved it. Planned to retire there. But stuff happens.

Prior to leaving ATL, the company Sharon worked for, Russell Corp., was bought by Fruit of the Loom out of Boiling Green, KY. In 2007, they moved her division, Mossy Oak Apparel, to Russell’s founding city, Alexander City, AL. The land we bought was about a 25 mile ride south to her work. Awesome. Living the country life. Easy commute for her. I kept running my small marketing business from a home office.

Fast forward to 2009. Fruit tells Sharon’s group they have decided to shutter most of the Alabama operation and everything and everyone is moving to KY headquarters. Dreams of our country retirement were deflated. We discussed the option of moving to KY and quickly decide NO – we aren’t following another employer. And good thing we didn’t. Within 2-3 years, FOTL had shut down most divisions of the old Russell, Corp.

So, what to do once Sharon’s job was gone? We needed two incomes to support this nice home we built.  But, we’re living in a very poor, rural area of east Alabama and there weren’t many high-paying jobs in the area. Still aren’t.  We decide to sell … or TRY to sell a $500K home and 21 acres, down a 3-mile dirt road, in the middle of nowhere (exactly where we wanted to be). It would take a special family to but this home. But we have to try so we put it on the market.

Now, what to do for gainful employment and where to live (if/when we sell it) and we have no desire to go back to the ATL or any other big city. We have learned to love small town America.

Light bulb goes off. Find a couple’s job since we have worked together a lot over the years in our marketing business.

I started doing some research online and discovered two very good websites that specialize in promoting couple’s jobs: Caretaker.org and Workingcouples.com. We had NO IDEA there were so many jobs for couples available and being offered. And, there are other sites beyond these two that can help, too. Note: in spring 2014, Workingcouples.com launched a sister site called Workinginnkeepers.com specializing in only Inn Keeper jobs since that is a big segment of these type of jobs.

That’s how our couple’s Job seed was planted. The silver lining from a job loss dark cloud. Stay positive and look for the next door to open. It will.