Obviously, I’ve been a slacker as far as blogging the last month or so. But then again, the villa has been unusually busy for June and will also be busy in July which is rare. So there has not been a lot of major project work going on since I last posted. But we’ve still been having a good time and making sure we keep the villa in shape.

We spent several weeks in late May getting the villa spruced up for a BIG wedding on 10 June 15. The group arrived on the 6th and stayed the week. Prior to their arrival we did some patio wall painting, some deck pressure washing, and fixed a few broken items, replaced some screens, and replaced some light bulbs. Wasn’t a lot of work but all was needed to get the villa in “Show Ready” condition.

The wedding rehearsal dinner and actual wedding and reception went off without any major issues. Although, the Sunday after they arrived, we had an A/C unit go out in the owner’s apartment that had to be addressed immediately as this was to be the “get ready” room for the bride and her brides maids. They NEEDED A/C, for sure. Luckily, we were able to get our relaible A/C guy out on Sunday and he had the new unit installed and running by Tuesday afternoon. Red Alert Over! Thanks Joe with Champion AC Service on STT.

A 100+ guest wedding creates a lot of trash. And the photo to the left doesn’t show all of it. Just part of the job …. dumpster trips – LOL 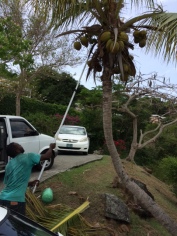 One of the pleasures of living in our studio at the villa is we have a coconut tree right at the top of our stairs where we park the villa car. Since we have been here, we have made a habit of getting a young coconut and getting the sweet water out of it on a regular basis. The locals say it’s good for the ole internal plumbing system.

The landscaping crew comes every other week and I pointed out to them that the coconut tree needed a little trimming. So they took care of it. Once the trimming was done, the A/C guy asked if he could take some with him. The tree was loaded so of course we said “yes.” The photo is the landcscape guy trimming the tree. Looks great now. It really needed the trim.

With guests in the villa most of June, it has given us a chance to do a few projects in the caretaker studio. One was the replacement of screen in the sliding doors out to our porch. These are oversized screen doors so we had to order online from a screen company in Colorado as no one had it this wide on island.

Screen Mouse tool – Must Have!

No telling when theses screens were last replaced. They were torn and patched in places and had come loose from the edge seal in several places. Plus, they were filthy from the Sahara dust and the cruise ship smog. Not a hard project, just takes some patience and the right tool …. the Screen Mouse. The Screen Mouse makes putting the rubber seal back into the groove a breeze. A “must have” tool here at the villa.

As you can see in the background, also doing villa laundry that day.

Had to order 5′ screen

The Harts before heading off to San Blas, Panama for hurricane season.

Another cool thing we did in June was go visit some friends on their sailboat as they were about to head off to San Blas, Panama for hurricane season. They have been living-aboard since about 2003 and they spend many winters in St Thomas and hurricane season in different places south – out of hurricane routes. So, before they departed they had Sharon and I out for a short visit to say good-bye. Living aboard isn’t our cup of tea but they seem to really enjoy the life on a sailboat. If you’d like to follow their travels, they have blog and the crossing to Panama was a little hairy. Read it at http://hartsatsea.typepad.com/hartsatsea/.

A benefit of having guests in the villa is it allows us free time to explore and go “beaching” – one of the reasons we’re here in paradise …. right? And now that low tourist season is here, the beaches are almost deserted …. the way we like them. So, we’ve had a few great beach days in June. No complaints here – LOL.

It’s a tough life but as Mike Rowe says, “Somebody’s Gotta Do It.”