A lot of folks grill. Folks love to BBQ. Me included. And I have always taken great care of my grills. Shoot, when we departed Blue Ridge, GA for St Thomas, I gave my neighbor my pride and joy New Braunfels Smoker Grill (with fire box) that I had had since 1996 … and it was still going strong. All it takes is a little TLC to make things last.

The salt/sea environment takes its toll, too.

Part of the “cleaning” duties here at the villa after guests depart is to clean the propane grill from top to bottom – have it ready for the next guests to use. When you have a villa full of guests AND they love to grill, the grill can get very nasty in a week or so. I’m not complaining, mind you. Just part of the caretaker duties and keeping the villa in “Show Ready” condition. But something happened back in the winter that caused me to do some “McGuyvering” to solve a major cleaning issue.

During one stay with a full villa, I went up to let the pool guy in for his weekly cleaning. I glanced over to the uncovered grill and saw a puddle of grease under the grill. Argh! A quick inspection and I saw that the little grease cup (probably held a liquid cup) had overflowed and the guests never mentioned it to me. So I promptly cleaned up the mess. I didn’t mention it to them as they were gone – probably to the beach or something.

At the end of their stay, guess what I found again? Another puddle of grease under the grill ….. BUT a much bigger puddle. ARGH again! So I had to clean that mess up …. again. 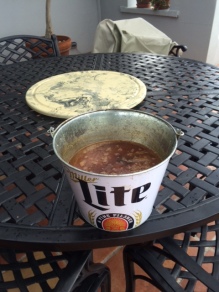 So now I’m thinking, “What’s the solution? Got to come up with a solution.” Obviously I need a bigger grease cup. Think, Richard, think.

Idea light bulb went off. We had a Miller Lite beer bucket we obtained at a show we attended last fall at the local amphitheater. Just sitting in the closet all lonely. It got repurposed …. ASAP. I hook it to the catch tray below with a small metal carabiner – works perfect  …. easy off and on for dumping and cleaning.

I have to say, this is one of my better “McGuyverisms” I have come up with. Totally solved the problem. And as you can see from the photo at right, the bucket is 3/4 full of grease and this is from less than a full house of guests AND for only 5 nights. But no more messes to clean up under the grill. It’s the ultimate grease bucket!

They really should make those grease cups bigger, don’t ya think?